Celebrate the 40th Anniversary of the Hult Center for the Performing Arts with Pink Martini!

“Pink Martini is a rollicking around-the-world musical adventure… if the United Nations had a house band in 1962, hopefully we’d be that band.”

In 1994 in his hometown of Portland, Oregon, Thomas Lauderdale was working in politics, thinking that one day he would run for mayor. Like other eager politicians-in-training, he went to every political fundraiser under the sun… but was dismayed to find the music at these events underwhelming, lackluster, loud and un-neighborly. Drawing inspiration from music from all over the world – crossing genres of classical, jazz and old-fashioned pop – and hoping to appeal to conservatives and liberals alike, he founded the “little orchestra” Pink Martini in 1994 to provide more beautiful and inclusive musical soundtracks for political fundraisers for causes such as civil rights, affordable housing, the environment, libraries, public broadcasting, education and parks.

One year later, Lauderdale called China Forbes, a Harvard classmate who was living in New York City, and asked her to join Pink Martini. They began to write songs together. Their first song “Sympathique” became an overnight sensation in France, was nominated for “Song of the Year” at France’s Victoires de la Musique Awards, and to this day remains a mantra (“Je ne veux pas travailler” or “I don’t want to work”) for striking French workers.  Says Lauderdale, “We’re very much an American band, but we spend a lot of time abroad and therefore have the incredible diplomatic opportunity to represent a broader, more inclusive America… the America which remains the most heterogeneously populated country in the world… composed of people of every country, every language, every religion.”

Featuring a dozen musicians, Pink Martini performs its multilingual repertoire on concert stages and with symphony orchestras throughout Europe, Asia, Greece, Turkey, the Middle East, Northern Africa, Australia, New Zealand, South America and North America. Pink Martini made its European debut at the Cannes Film Festival in 1997 and its orchestral debut with the Oregon Symphony in 1998 under the direction of Norman Leyden. Since then, the band has gone on to play with more than 50 orchestras around the world, including multiple engagements with the Los Angeles Philharmonic at the Hollywood Bowl, the Boston Pops, the National Symphony at the Kennedy Center, the San Francisco Symphony, the Cleveland Orchestra, and the BBC Concert Orchestra at Royal Albert Hall in London. Other appearances include the grand opening of the Los Angeles Philharmonic’s Frank Gehry-designed Walt Disney Concert Hall, with return sold-out engagements for New Year’s Eve 2003, 2004, 2008 and 2011; four sold-out concerts at Carnegie Hall; the opening party of the remodeled Museum of Modern Art in New York City; the Governor’s Ball at the 80th Annual Academy Awards in 2008; the opening of the 2008 Sydney Festival in Australia; multiple sold-out appearances, and a festival opening, at the Montreal Jazz Festival, two sold-out concerts at Paris’ legendary L’Olympia Theatre in 2011; and Paris’ fashion house Lanvin’s 10-year anniversary celebration for designer Alber Elbaz in 2012. In its twentieth year, Pink Martini was inducted into both the Hollywood Bowl Hall of Fame and the Oregon Music Hall of Fame.

Not only does Pink Martini bring the party wherever they perform but this will be an actual party! The Hult Center’s 40th Anniversary kicks off with this concert and the additional add-on afterparty. The concert itself will feature BOTH China Forbes and Storm Large led by the charismatic Thomas Lauderdale. This is Pink Martini at their best and definitely an event not to be missed.

Come celebrate with us! 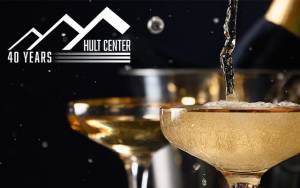 Keep the fun going at the afterparty!
Add-on this experience after selecting your seats.

It was that same year Harvard classmate Thomas Lauderdale invited her to sing with Pink Martini, and she has since fronted the band as well as written many of the band’s most beloved songs with Lauderdale, including “Sympathique,” “Lilly,” “Clementine,” “Let’s Never Stop Falling in Love,” “Over the Valley” to name a few. China’s solo original song “Hey Eugene” is the title track of Pink Martini’s third album and many of her songs can also be heard on television and film. She sang “Qué Será Será” over the credits of Jane Campion’s film “In the Cut” and her original song “The Northern Line” appears at the end of sister Maya Forbes’ directorial debut “Infinitely Polar Bear” (Sony Pictures Classics). Both films star Mark Ruffalo by coincidence.

With Pink Martini, China has appeared on The Late Show with David Letterman, Late Night with Conan O’Brien, The Tonight Show with Jay Leno and Later with Jools Holland. She has performed songs in over 20 languages on 9 Pink Martini studio albums and has sung duets with Rufus Wainwright, Michael Feinstein, Carol Channing and many other wonderful artists. She has performed in venues from Carnegie Hall to Red Rocks, the Hollywood Bowl to Paris’s l’Olympia and Sydney Opera House. Her second solo album “78” came out on Heinz Records in 2008, a collection of autobiographical folk-rock songs.

In July 2021 China released her post-pandemic anthem “Full Circle” and is currently at work on her third solo album of original material.

Storm Large has been singing since the age of five. A graduate of the American Academy of Dramatic Arts in New York, Large moved to San Francisco and later to Portland, where she founded her band Storm and The Balls. The Balls developed a cult-like following in clubs for their “mash up” renditions of artists such as ABBA, Billy Idol, Led Zeppelin and Olivia Newton-John as well as their own compositions.

Storm Large shot to national prominence in 2006 as a finalist on the CBS show Rock Star: Supernova, where, despite having been eliminated in the week before the finale, she built a fan base that follows her around the world to this day.In 2007, she starred in Portland Center Stage’s production of Cabaret with Wade McCollum. The show was a smash hit, and earned Large glowing reviews. Her autobiographical musical memoir Crazy Enough played to packed houses in 2009 during its unprecedented 21-week sold-out run at Portland Center Stage. She went on to perform a cabaret version of the show to critical acclaim at the Edinburgh Festival Fringe, Adelaide Festival in Australia, and Joe’s Pub in New York. Crazy Enough, released as a book by Simon and Schuster in 2012, was named Oprah’s Book of the Week, and awarded the 2013 Oregon Book Award for Creative Nonfiction.

Storm made her debut with Pink Martini in April 2011, singing four sold-out concerts with the National Symphony Orchestra at the Kennedy Center in Washington, D.C. She continues to perform with the band, touring nationally and internationally, and appears on the band’s most recent albums, Get Happy and Je dis oui! She debuted with the Oregon Symphony in 2010 and made her Carnegie Hall debut in May 2013, singing Kurt Weill’s Seven Deadly Sins with the Detroit Symphony as part of the Spring for Music Festival. The New York Times called her “sensational.” In fall 2014, Storm and her new band released the album Le Bonheur, a collection of tortured and titillating love songs from the American Songbook that are beautiful, familiar, yet twisted, much like the lady herself. In 2021, Storm shot to national prominence yet again in primetime television, this time wowing the judges with several performances on NBC’s acclaimed America’s Got Talent, reaching the semi-finals.

Raised on a plant nursery in rural Indiana, Pink Martini bandleader Thomas M. Lauderdale began piano lessons at age six with Patricia Garrison.  When his family moved to Portland in 1982, he began studying with Sylvia Killman, who to this day continues to serve as his coach and mentor. He has appeared as soloist with numerous orchestras and ensembles, including the Oregon Symphony, the Seattle Symphony, Portland Youth Philharmonic, Chamber Music Northwest and several collaborations with Oregon Ballet Theatre.  In 2008, he played Gershwin’s Piano Concerto in F with the Oregon Symphony under the direction of Christoph Campestrini.

Active in Oregon politics since a student at U.S. Grant High School (where he was student body president), Thomas served under Portland Mayor Bud Clark and Oregon governor Neil Goldschmidt. In 1991, he worked under Portland City Commissioner Gretchen Kafoury on the drafting and passage of the city’s civil rights ordinance. He graduated with honors from Harvard with a degree in History and Literature in 1992.  He spent most of his collegiate years, however, in cocktail dresses, taking on the role of “cruise director” … throwing waltzes with live orchestras and ice sculptures, disco masquerades with gigantic pineapples on wheels, midnight swimming parties, and operating a Tuesday night coffeehouse called Café Mardi.

Instead of running for political office, Lauderdale founded Pink Martini in 1994 to play political fundraisers for progressive causes such as civil rights, the environment, affordable housing and public broadcasting. In addition to his work with Pink Martini, Lauderdale has most recently completed two long awaited collaborations with dear friends.  In 2018 he completed Love for Sale, an album of jazz standards with singer/civil rights leader Kathleen Saadat, that began as a gift to a few friends and ended up being a Billboard Jazz charts-ranking album the month it was released.

In 2019, Thomas Lauderdale and members of Pink Martini collaborated on a new release with the international singing sensation Meow Meow. The album Hotel Amour – the culmination of almost a decade of work- features guest appearances by Rufus Wainwright, The von Trapps, Barry Humphries (of Dame Edna fame), and the inimitable late French pianist and composer, Michel Legrand.

Lauderdale currently serves on the boards of the Oregon Symphony, Pioneer Courthouse Square, the Oregon Historical Society, Confluence Project with Maya Lin and the Derek Rieth Foundation. He lives with his partner Hunter Noack in downtown Portland, Oregon.

You may also enjoy…