Departments of the Hult: Technology

It’s been a minute since the Hult Center for the Performing Arts has hosted guests.

For the past year, the building has appeared silent from the street, but inside staff have kept busy, preparing for the time when the Hult can once again open its doors.

“When the public comes back,” Hult Center Director of Theater and Facility Operation Jeff Weinkauf said, “they’re going to see renewed, refreshed everything.”

In the first of a six-part series about the Hult Center, you’ll get an inside look at what makes the place tick and unique struggles. When you walk through the lobby and take your seat in either the Silva Concert Hall or the Soreng Theater, we want your focus on the event and the experience. You’re not supposed to see the ropes and pulleys that move things on stage. The goal is an immersive experience. The entire building is steeped in interesting technology and contraptions that can move huge set pieces. It’s the behind-the-scenes magic that brings your favorite musicals to life or keep your eyes glued to the stage. The light, audio and visuals presented to you make you forget that you’re sitting in a giant theater.

And there’s a whole host of people who help bring that to you.

“They don’t want to be seen,” Hult Center Assistant Technical Director Nathan Cox said. “We do this stuff backstage so the experience for everyone in the house can be magical.”

It’s rare that a thriving performing arts venue gets more than a few days or a week off. The goal is always to keep the place humming with activity. When the COVID-19 pandemic forced the Hult to close, staff wasted little time in making a list of things to work on.

“We’re always trying to book this place up,” Weinkauf said, “which means there are very few gaps to just stop the whole world.”

Weinkauf worked with the Hult’s executive team to identify areas of improvement. The list was long and included many things that hadn’t been done since the building was opened 38 years ago. Getting up into the hard-to-reach corners to freshen up faded paint and general cleaning and organizing were priorities, of course. But so were more ambitious projects like replacing the nearly 40-year-old wiring throughout the building and updating the wireless network. Some of that people will notice, like the improved wi-fi signal in the Silva and Soreng, but other things – like the painting of the orchestra pit – will only be seen by a few.

By leveraging CARES funding, the Hult also invested in new technology to draw even more shows to the southern Willamette Valley. Weinkauf’s team updated the building’s audio network to a more wireless set up that gives the Hult even more flexibility. A new lighting project replaced the heavy, energy-sapping stage lights with LED set ups that are networked to the control board. Not only will the lights use much less energy, but they’ll be easier to control with a tech member being able to change the color, temperature and position of any light on stage with a click of a mouse. 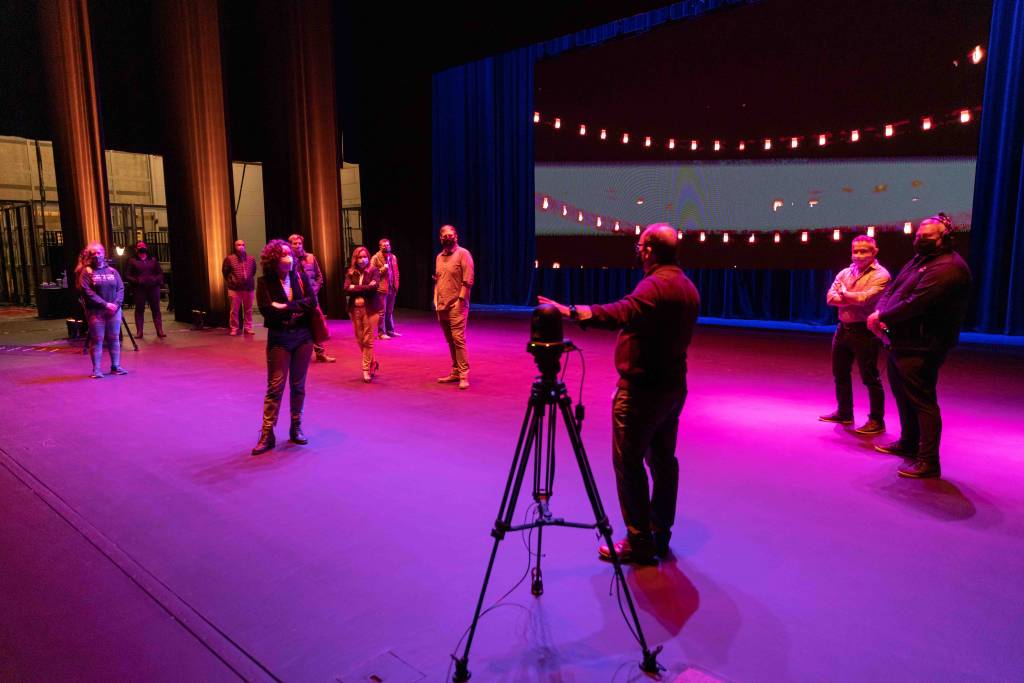 Hult Center for the Performing Arts Tech Director Jeff Weinkauf demonstrates one of the Hult’s new 4K cameras for a group recently on the stage of the Silva Concert Hall.

The Hult also invested in a mobile five-camera streaming system that includes both studio-type and smaller 4K remote cameras. Throw in a new video wall that can be put together with smaller LED panels and either set up on the ground or hung from the batons and the Hult is even more prepared for presenting shows in 2021 and beyond.

“It’s a unique resource that can be deployed in all different kinds of ways,” Weinkauf said of the wall, though he could be talking about the Hult in general. He said the goal all along has never been to just get new toys for the sake of getting them.

“Technology should always endeavor to remove barriers to communication.”

And behind all of the shiny tech will be someone who understands how to operate it. It might not be well known that many of the stagehands and staff at the Hult Center are members of the labor union International Alliance of Theatrical Stage Employees. They’re highly trained in the complex workings of stagecraft, from running the intricate batten system that hangs hundreds of feet above the stage to sound and lighting.

There was a concern, though, that the Hult would lose staff if the forced closures lasted. Hult administrators, with support by the City, moved quickly to limit job loss by implementing its full overhaul.

“They’ve done a great job of managing their world and to keep them working,” Weinkauf said.

“Our labor force is how we get things done here. We have to have a healthy labor force to do shows. It’s really a great relationship to have with IATSE.”

Cox, who used to be a stagehand working the fly rail before getting promoted, likes to describe the decision to keep staff on to the choice to not drydock a ship when it’s in port.

“It takes a lot longer to get the ship sea-ready if it’s been sitting in dry dock for a while,” he said. “We kept a minimal crew on to keep the ship floating to make sure it’s ready to sail again.” 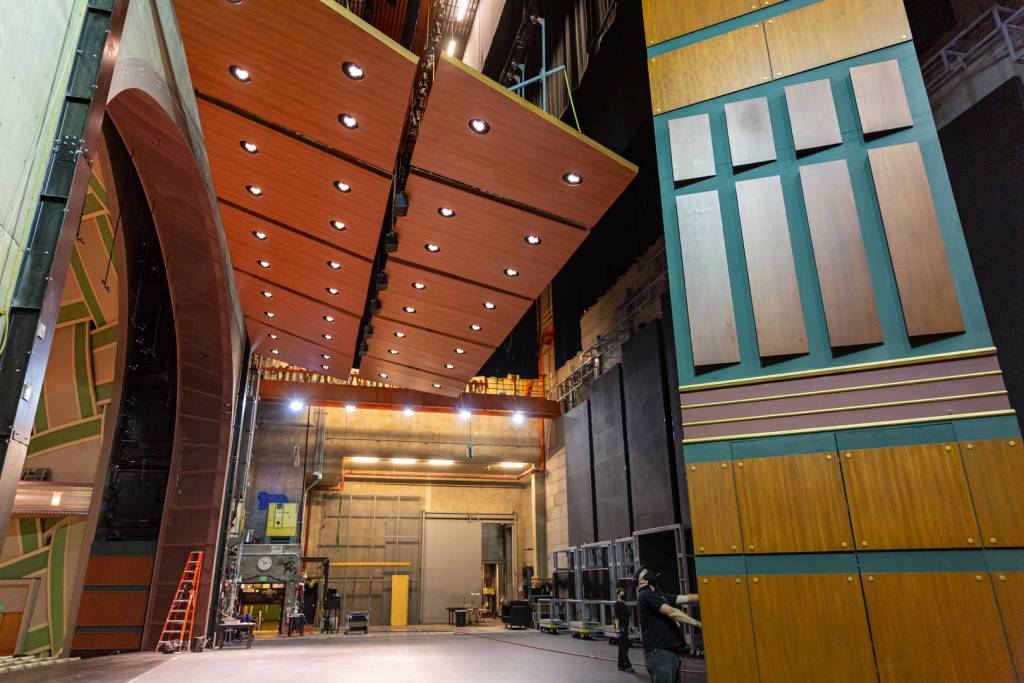 Members of the Hult Center stagehand crew move a portion of the Eugene Symphony shell into place for a recent recording session on the Silva Concert Hall stage.

That meant keeping staff busy. Recently the Eugene Symphony wanted to use the Silva stage to record, so staff came in to start the half-day process of setting up the symphony shell that’s stored at the back of the stage. Other people set up the audio and recording equipment. Even with no audience, these opportunities give staff a chance to stay sharp.

“The people working are a specialized group,” said Cox, who has worked in some capacity at the Hult since 1997. “Having this opportunity to keep people working is a wonderful thing that I’m very grateful for.”

Now, with vaccines starting to be distributed in the community, the Hult team is eyeing a day when it can once again welcome our patrons. The day that can happen is unknown, but Weinkauf said he feels like they’re in a really good position.

“Everything,” he said, “was done with an eye toward stewardship, speed and functionality.”

Cox said he can’t wait. While standing near the stage in the Silva Concert Hall, he looked up at the iconic basket weave sealing. He said a retired stagehand said it best.

“Despite working here for years, it feels new every time,” Cox said. “After every show, we reset. It’s a blank canvas.”

Story and images by Ben Schorzman

ALTON BROWN LIVE: Beyond The Eats